Scoring With the Wrong Twin (WAGS #1) by Naima Simone 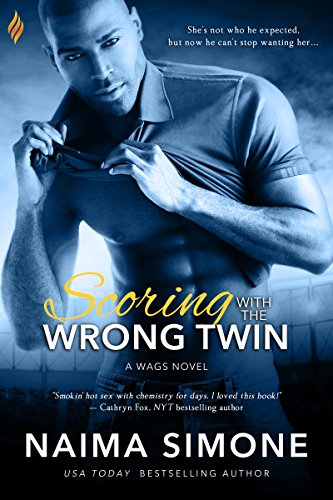 
Shy, awkward Sophia Cruz has a hard time telling her vivacious identical twin “no.” But when her sister begs her to swap places for a modeling shoot, she caves … again. Then Zephirin Black walks onto the set. The brooding, aloof, and gorgeous tight end for the Washington Warriors. But she can keep it professional… She has to. Because the adorkable Cruz twin has no luck with guys once they compare her to her sister.

After a bad break-up, Zeph hasn’t been big on second chances—and even less with trust. But he finds himself giving please-call-me-by-my-middle-name-Sophia both. The woman he’d dismissed as a spoiled cover model is different from the first time he met her. Quirkier. Funnier. Definitely sexier. What started as one night turns into another…and another…and another…

Still, Sophia can’t go on keeping her secret from him. But telling Zeph the truth will mean losing him for good.


Well... the title of the book pretty much sums up the story.

One of the things I didn't really like was how Naima strongly pointed out the next romance couple. It felt a bit cheap. Like a used car salesman.