The Rogue Queen (The Hundredth Queen #3) by Emily R. King 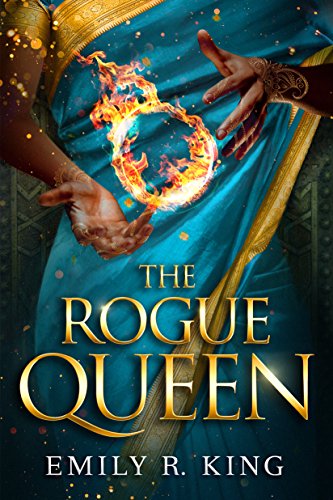 
In the explosive third volume of The Hundredth Queen Series, the queen of fire faces off against a demon of ice.

Despite the odds, Kalinda has survived it all: Marriage to a tyrant. Tournaments to the death. The forbidden power to rule fire. The icy touch of a demon.

That same demon now disguises itself as Rajah Tarek, Kalinda’s late husband and a man who has never stopped haunting her. Upon taking control of the palace and the army, the demon brands Kalinda and her companions as traitors to the empire. They flee across the sea, seeking haven in the Southern Isles.

In Lestari, Kalinda’s powers are not condemned, as they are in her land. Now free to use them to protect those she loves, Kalinda soon realizes that the demon has tainted her with a cold poison, rendering her fire uncontrollable. But the lack of control may be just what she needs to send the demon back to the darkest depths of the Void.

To take back the empire, Kalinda will ally with those she distrusts—and risk losing those most loyal to her—to defeat the demon and bring peace to a divided nation.

The Rogue Queen is the third book in The Hundredth Queen series.

I was hoping that this was the last book in the series since my attraction to this series was starting to dwindle. But of course, the series will have another book coming out around August 2018.

The story is about Kalinda and her group trying to find a way to destroy the demon disguised as Rajah Tarek. New alliances are made and old dangers reappear. Add Kalinda's corrupted powers into the mix, and things get even more complicated.

Overall, I enjoyed the story.... but this series has lost some of the sparkle. The romance was a bit bland and the characters just became boring. Some of the scenes were just a drag to read, and I wanted to stop reading it entirely. I really hope The Warrior Queen turns things around.