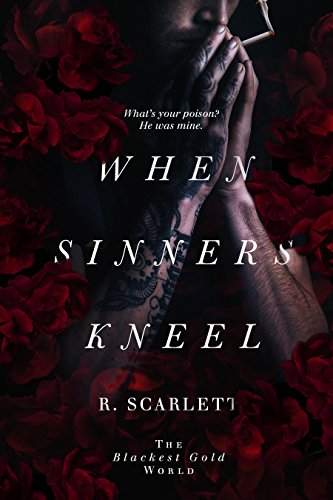 
Hell is empty, and all the devils are here. Lex Harvey came to The Pit to find her missing friend. Someone who fights there must have the answers she’s seeking. Instead, she found him. The damage inside her matches the darkness inside him. She’s only eighteen, but the feelings she has for him are as old as time. Beau Knight should have ruled New York. Falling in love was the beginning of his end. He watched her die and he lost his heart. Now, The Pit is his heaven and his hell. The only place he can be himself. They’re both beyond fixing. Addicts, with desires humans couldn’t understand. A soulless man and a souleating girl. How do you find redemption from your demons when you are one?


When Sinners Kneel is a spin-off of the Blackest Gold series. The previous series does not have to be read, but in my opinion, reading these books in order is slightly more satisfying.

Beau Knight was destined to be the leader of Scorpios. But he lost his position and heart when he fell in love with a human.

Living in darkness, he ruled the low-class demons. He was still involved with the family business, but to control his beast, he needed to fight other demons at The Pit.

Lex is a low-class demon looking for her missing friend. The last place her friend was seen was the place where Beau fought every night. Her dangerous investigation leads her to a dark path, and Beau can't help being protective over Lex.

The entire book is full of chemistry as Beau and Lex are constantly craving each other. A dark incubus and a sexy soul eater. Obviously this story is indeed steamy due to the types of demons the characters are.

Overall I really enjoyed the book, but I was hoping for something more balanced than just the constant attraction. Other than that, I can't wait for R. Scarlett's next book.