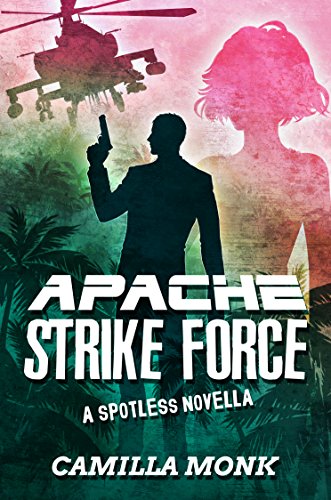 
He’s death from the sky, ready to strike. He never compromises, never lets go, never settles for second best when it comes to his offspring. He’s the… Apache.

With his nose-mounted sensor, night vision system and 30 mm chain gun, Simon Halder isn’t your average helicopter dad, and when Island, the daughter he thought he had lost, reappears after eight months of captivity, someone’s gonna have to pay.

But since pretty much everyone involved has paid already, there’s only one target left in sight for this attack helicopter… Island’s new boyfriend: the man people just call March.

A companion to book 4 of the Spotless series—Butterfly in Amber—this novella is 24,000 words of gripping hitman versus helicopter dad action, including family reunions, hardcore hovering, veganism, housekeeping, and fatherly love. For your safety, please read the books in order. Because otherwise you’ll get spoiled. Hard.

Yay! I missed Island and March.

Apache Strike Force is a short story about them joining the real world again.

We see some more of March's OCD ways, and their interesting friends and family.