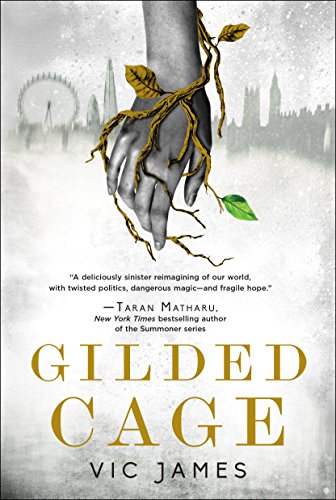 In a darkly fantastical debut set in modern-day Britain, magic users control everything: wealth, politics, power—and you. If you’re not one of the ultimate one-percenters—the magical elite—you owe them ten years of service. Do those years when you’re old, and you’ll never get through them. Do them young, and you’ll never get over them.

This is the darkly decadent world of Gilded Cage. In its glittering milieu move the all-powerful Jardines and the everyday Hadleys. The families have only one thing in common: Each has three children. But their destinies entwine when one family enters the service of the other. They will all discover whether any magic is more powerful than the human spirit.


Definitely not what I was expecting. I dived into the book thinking it was going to be light and fun. But to my surprise, I discovered that it was about injustice in society, darkness in human nature, and corruption in politics. Heavy topics weaved into an incredible story. If I picked this up as a teenager, there would of been a chance of not finishing because.... honestly... I was a teenager with a short attention span. But my memories as a youngster is a big foggy. So maybe I would have enjoyed it tremendously.

The story switches between different characters throughout the book, but it mainly focuses on two British families from opposite classes.

The Hadley's are common. They have no supernatural power; therefore they are required to serve 10 years of their lives as slaves. The years can be done when they are old or young, but the oldest daughter, Abi, thought it would be best to serve together as a family at an estate instead of a factory. The application was approved for everyone but Luke.

"Millmoors change people, Luke Hadley. But what most folk never realize is that you get to choose how."

Luke, Abi's younger brother, was sent to Millmoor, a polluted place with harsh living conditions. His body and mind changed from his exposure to cruelty and brutality. During his time he also meets different people fighting for a cause. But how can common people without powers go against the Equals? Equals that have the power to heal and destroy. Beings that could even manipulate the minds and actions of others.

The Jardines are one of the most powerful families in Britain. The family has 3 sons. Gavar, the oldest and the next heir. Jenner, the middle child with no supernatural power. Silyen, the youngest and most powerful son with an unquenchable thirst for knowledge. Serving the family as slaves seems easier than years at a factory, but some of the Jardines have a dark agenda.

This book truly deserves a discussion at book clubs or class rooms. Once I got attached to the characters, I couldn't put this down. I highly recommend this book for someone looking for adventure and also looking for something thought provoking to read.