The Heiress by Cassia Leo 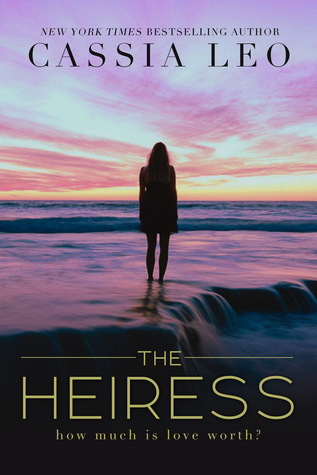 
How much is love worth?

Twenty-two-year-old Kristin and her single mom have always struggled to make ends meet. When her mother’s body begins to deteriorate after many back-breaking years of working as a housekeeper, Kristin must say farewell to her college dreams and hello to a full-time job waitressing. She doesn’t really mind. After all, giving up on her dreams will be her penance for that one horrible night.

Her luck begins to turn when she meets Daniel Meyers. Daniel is sexy and funny, but most importantly, he wants to get to know the real Kristin. It doesn’t hurt that he’s also extremely wealthy and intent on protecting her. Kristin feels safe with him. She wants to open up to him, to share the details of the awful night that changed her life. But she can’t shake the feeling that Daniel may be keeping a dark secret of his own…

The Heiress is about a young woman with the world on her shoulders. As her mother's body weakened from years of physical labor, Kristin left school to take care of her mom.

When she isn't assisting her mother, Kristin works at a bar to pay for a tiny apartment in the Bronx. She needs a break but she can't get out of the endless cycle.

Daniel Meyers is a natural protector. He is also a very wealthy man. He falls deeply in love with Kristin as she continuously shocks him with her loyalty, bravery, and beauty. There's just one problem. His own dark secrets might break them apart.

I loved this story. The first half of the book was told in Kristin's point of view, and then it switched to Daniel's. It was absolutely addicting, and my mind was always wondering what was going on. Daniel was such an enigma, and I couldn't stop thinking about him.

Cassia Leo does a brilliant job to pull you in. Her writing is like a drug! I wish the ending was slightly different, but overall I really enjoyed this book!