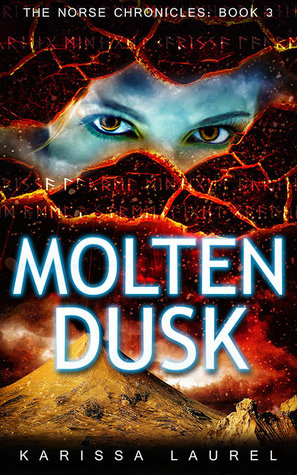 While recovering from a devastating betrayal, Solina becomes increasingly drawn to Thorin as he helps her hunt down Skoll, the mythical wolf who vowed to kill her. If she can find and destroy the beast, she’ll bring a swift and brutal end to her enemies’ schemes. But nothing ever goes as planned in Solina’s strange new world.

During her search for Skoll, Solina uncovers a plot to unleash a battalion of legendary soldiers and launch an apocalyptic war. Before she and her allies can locate the fabled army, several ghosts from her past return to haunt her. Solina must fight for life and the fate of the world, or her hopes for love and a peaceful future will go up in flames.

A great ending to a thrilling series! I'm really going to miss these characters. Solina goes on a wild journey to save the world, and Thorin swears to protect her at all costs.

Although I wished it went more into their ancient past, I really enjoyed the story, fantasy, and romance. Karissa Laurel created a marvelous adventure. Bravo!