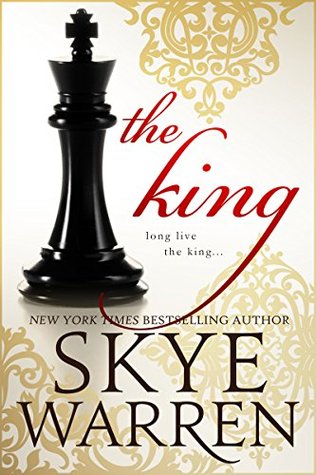 My father gambles every night, falling deeper and deeper into debt. When he hits the bottom, he places a new bet: his daughter. I'm his entry bet to the biggest underground poker game.

Every kind of danger circles the velvet-covered table, but only one man makes me tremble.

The son of a criminal king.

We don't belong together, but I'm caught in a twisted game.

THE KING is the first book in the new Masterpiece duet about risking your heart and finding yourself. It's a spin-off from the USA Today bestselling trilogy but can be read separately.

The Masterpiece Duet is a spin-off of Skye Warren's Endgame series, but I highly recommend reading the Endgame series first to fully understand the story.

This story is dark and twisted. You'd also expect it to be steamy, but surprising there isn't any sexy or romantic scenes. Damon and Penny have a strong attraction but they both fight it. Damon believes he's too old and corrupt, and Penny believes that Damon is too dangerous.

This book also has some parts that run parallel to the Endgame series. Unfortunately I thought that the story wasn't as fluid, and I didn't enjoy this as much as the other books. I really hope that the next book is more focused on them.

Overall I enjoyed this journey, and I can't wait for the next book about Penny and Damon. As they are paying for the actions created by their fathers, I'm sure The Queen is going to blow me away.