The Moon Shines Red (Heart of Darkness #1) by Pamela Sparkman 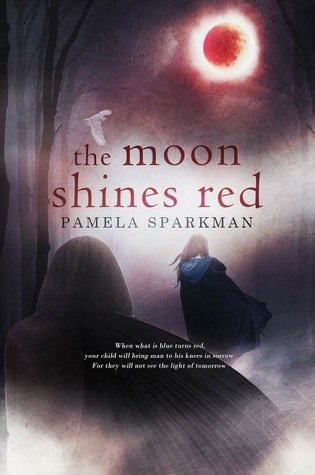 The red glow of the moon washed over land and sea like a faded bloody stain. Everything was bathed in it, including him. A constant reminder of the curse that marked him before he was born. Every night he gazed at it like he was lured and haunted by it. It followed him, it beseeched him. It called out to him. Just once he wanted to see the moon glow as everyone else saw it. Bright and illuminating. But he knew that would never be possible.

The all too familiar feeling of despair suffocated him, like long gangly fingers squeezing his neck, cutting off his air. He fell to his knees and begged for the sky to fall on him. He had suffered long and tirelessly and he was desperate for it to end. And yet, he fought to breathe. He fought to stand back on his feet. Because fighting back was as instinctual to him as breathing. He had come too far to let his loneliness and despair get the best of him now. He was battle worn and weary, but he still had a reason to live.

Or so he hoped.

He stood back on his feet and he fought against the doom that hovered over him since the day he was born and he stared up into the darkened sky.

At the moon that shines red only for him.


He was cursed.
I should have stayed away from him. But I couldn't.
HE was my love...my life. And he just might kill me.
So I guess that means...he may also be my end.

THIS IS A MUST READ! I can't stop thinking about this book! Get ready for magical events, dark curses, and mystical creatures from other worlds.

The story is mainly about Elin. She has always had issues fitting in and has never felt normal. When she goes to a library and learns about an old disagreement among the humans and fae, things start changing and unraveling.

Lochlan is cursed. He's been living in darkness for generations. He feels alone and angry at the world, but something about Elin brings him out of the shadows.

The two can't stop their hearts from wanting each other. And when something threatens Elin, Lochlan swears to protect her with his life.

I felt so much for the lovers, and my heart broke for them. I even loved reading about the evil characters. Obviously... that only means one thing. EVERYTHING ABOUT THIS BOOK IS PERFECT!

Pamela Sparkman's writing is absolutely magical and she weaves this story flawlessly. I hope that in the next book, there will be more Elin and Lochlan. I've got some questions, and I need answers!