Her Master's Servant (Lord and Master #2) by Kait Jagger 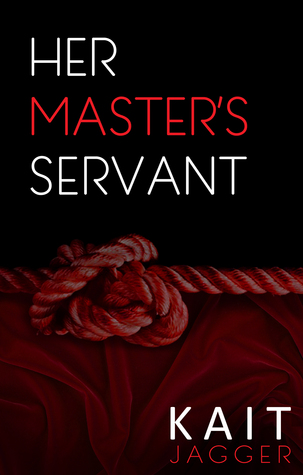 Betrayed. Luna Gregory has been betrayed by both her long-time mentor and the love of her life. Reeling from the discovery that the Marchioness of Lionsbridge used her as a pawn in a plot to retain control of the 500-year-old Arborage Estate, Luna runs as far away as she can get, to remote Shetland. But though she tries to put the past behind her, she can't escape memories of the overwhelming love she shared with the heir of Lionsbridge, Stefan Lundgren. And Stefan has vowed to get her back, by any means necessary.

Stefan ultimately reclaims what is his in a single, searing night of passion, but the wounds he and Luna have inflicted on each other run deep. As they attempt to rebuild a future together, a dark seam of power, lust and control opens up between them. Addictive as it is enthralling, Stefan’s tender abuse awakens an answering darkness in Luna. Can they stop punishing each other? Do they want to? The fate of Arborage – and of their love – hangs in the balance.

The hotly anticipated second book in the Lord and Master trilogy.

"I don't want to bargain with myself anymore. I want to change. I want to be a man you are proud to be with."

Luna feels betrayed. All she wants to do is lock her feelings in a box and forget about the past. She can't stop thinking about Stefan and is miserable from the hurt and loss.

Stefan is also suffering without Luna. He won't stop until he gets her back, but how is he going to get Luna to trust him again?

In Her Master's Servant, we get to see Stefan transform into a different man. He puts in a lot of effort to not only spend more time with Luna, but he also tries to be more open about himself. Their connection is stronger than before, but will it be enough?

You will not be disappointed in the love making. Get ready for some steamy punishments. I can't wait to read the third book in the series!