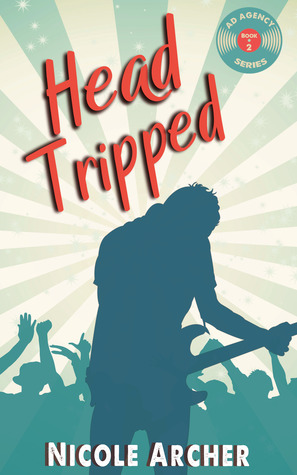 Violinist Effie Murphy moved to New York to pick up the pieces of her life. After six months, she’s still broken, not to mention flat broke. But everything changes one weird night, when she meets Elias, the lead of one of the hottest bands in the world. Except, she doesn’t know that. She also doesn’t know he’s leaving the country soon.

Elias hates life in the spotlight. So when he meets Effie at a random party, he pretends to be an unemployed deadbeat. Why not? He’ll never see her again. Except, he can’t stop thinking about the wild woman who helped him write songs that night.

Head-Tripped is the second book in the Ad Agency Series and can be read as a standalone. However, it’s a more fluid experience to start with Book 1, since many of Road-Tripped’s characters are threaded into this book.

Effie is cute and quirky with lots of personality. It's hard not to love her, and it's so easy to connect with her.

Elias is a rock star that hates being a rock star. He is proud of his accomplishments, but also misses being normal and having privacy. When a beautiful girl stumbles into his life, he can't stop his attraction. He makes her feel normal and alive. She is a muse that won't leave his thoughts.

The two end up writing some great music together, and Effie ends up going on tour with the band. But there are some serious issues between the two.

I enjoyed this book more than the first one, and I couldn't get enough of the storyline and characters. The cute moments also made me smile and giggle at times. I can't wait to read Nicole Archer's next book!