The Butterfly Project by Emma Scott 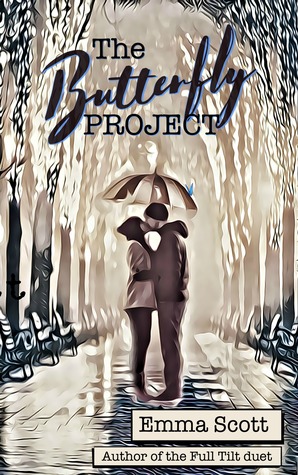 At age fourteen, Zelda Rossi witnessed the unthinkable, and has spent the last ten years hardening her heart against the guilt and grief. She channels her pain into her art: a dystopian graphic novel where vigilantes travel back in time to stop heinous crimes—like child abduction—before they happen. Zelda pitches her graphic novel to several big-time comic book publishers in New York City, only to have her hopes crash and burn. Circumstances leave her stranded in an unfamiliar city, and in an embarrassing moment of weakness, she meets a guarded young man with a past he’d do anything to change...

Beckett Copeland spent two years in prison for armed robbery, and is now struggling to keep his head above water. A bike messenger by day, he speeds around New York City, riding fast and hard but going nowhere, his criminal record holding him back almost as much as the guilt of his crime.

Zelda and Beckett form a grudging alliance of survival, and in between their stubborn clash of wills, they slowly begin to provide each other with the warmth of forgiveness, healing, and maybe even love. But when Zelda and Beckett come face to face with their pasts, they must choose to hold on to the guilt and regret that bind them, or let go and open their hearts for a shot at happiness.

The Butterfly Project is a novel that reveals the power of forgiveness, and how even the smallest decisions of the heart can—like the flutter of a butterfly’s wings—create currents that strengthen into gale winds, altering the course of a life forever.

After I finished the Full Tilt series, I had to get my hands on this book about Zelda. This heartwarming story is a spin-off but it can be read as a standalone.

Zelda leaves her job in Las Vegas to follow her dreams in New York. She takes a risk to get her graphic novel published. But after three interviews, she only finds disappointment because her story lacks 'heart.'

With her funds dwindling, her only option is to head back to Vegas. But fate leads her to Beckett Copeland.

Beckett Copeland is juggling two jobs. During the day, he is a bike messenger. At night, he buses tables at an Italian restaurant. It's hard for him to get a decent job because of his criminal record.

As he is behind a little on rent for his tiny studio apartment, Zelda asks to be his roommate. This way she gets time to make some revisions, while Beckett doesn't have to worry about his financial situation.

The tiny studio forces them to get close, and painful truths from the past come to light. Beckett helps her heart heal, and even helps her complete the novel.

I love the graphics in the story. It really makes this story unique. The romance between Zelda and Beckett grows smoothly and gradually. Before I knew it, I was so attached to the characters.