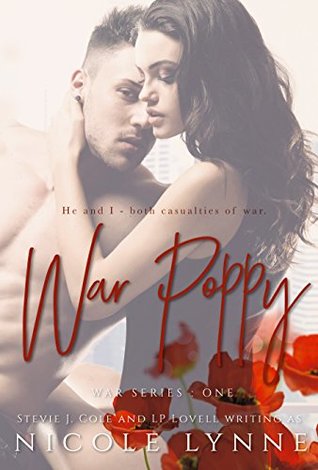 Poppy
Love and war. Two words that should have little association, but to me the two go hand in hand. Both are a tragedy. They rip you open and spit you out. The war killed my husband, Connor, shattered my will to live, and took my best friend. Brandon may not have physically died in that war, but his soul did. And now we're left to pick up the wreckage. Expected to move on when all that is left is the ruins of a life we once had.

Brandon
War. It took everything from me, even myself. When you're only able to exist, death seems like a blessing. Pain...a welcome distraction. I ran from everything associated with my past, and then she found me, fighting, drowning myself in whisky, trying to forget. She reminds me of Connor, of what I've lost—what we've lost. In the midst of destruction, she's a salvation I don't deserve.
I shouldn't love him.
I shouldn't love her.
Love is a war we never should have fought.

"Two lost souls trying to save each other from unsalvageable events. She may be my hope, but I'm surely her destruction."

War Poppy is a beautiful love story between a grieving widow and a broken soldier. It deals with difficult topics and complex issues. It's not a feel good romance, but it will touch your heart nonetheless.

It all started with Connor's death. Brandon feels guilty for being the one to survive. He feels empty and worthless, and he's also suffering from severe PTSD. The only thing he wants to do is forget. So every night he fights at an illegal ring and gets drunk on whiskey.

Poppy is not only grieving for her husband, but she's also grieving for her best friend. She wants to understand him and help him during the tough times. Even though she married Conner, Brandon was her first love... her first everything, and she'll always be there for him.

As the point of view switches between Poppy and Brandon, we really get to dive into their thought process. The story almost brought me to tears because it was so heartbreaking at times.