Queen of Chaos (The Fourth Element, #3) by Kat Ross 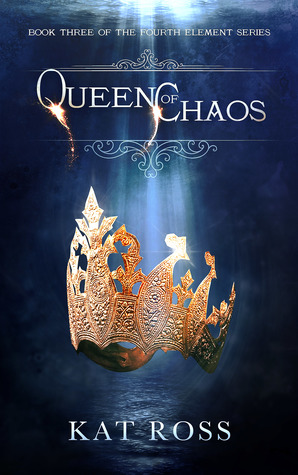 As the dark forces of the Undead sweep across what remains of the empire, Nazafareen must obey the summons of a demon queen to save Darius's father, Victor. Burdened with a power she doesn't understand and can barely control, Nazafareen embarks on a perilous journey through the shadowlands to the House-Behind-the-Veil. But what awaits her there is worse than she ever imagined…

A thousand leagues away, Tijah leads a group of children on a desperate mission to rescue the prisoners at Gorgon-e Gaz, the stronghold where the oldest daēvas are kept. To get there, they must cross the Great Salt Plain, a parched ruin occupied by the armies of the night. A chance encounter adds a ghost from the past to their number. But will they arrive in time to avert a massacre?

And in the House-Behind-the-Veil, Balthazar and the Prophet Zarathustra discover that they have more in common than meets the eye. But is it enough to redeem the necromancer's bloodstained soul and thwart his mistress's plans?

As a final showdown looms with Queen Neblis, the truth of the daēvas' origins is revealed and three worlds collide in this thrilling conclusion to the Fourth Element series.

An unforgettable fantasy and adventure that's perfect for young adults that love action, magic, and bits of romance. This series is truly amazing, and I'm sad that it's over.

Just like the previous books in the series, the point of view switches between the characters. I loved the twists and turns, and I loved how the events came together incredibly.

I also really enjoyed how there were some new romances formed and old friendships united. There were just so many layers involved. My favorite part of this book was reading about Darius, Nazafareen, and Victor, and I hope that Kat Ross writes more about them. Their story can't be over. Gah! This book was amazing!