From This Fae Forward (Paranormal Wedding Planners #2) by A.E. Jones 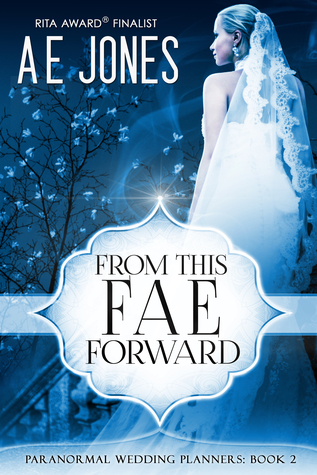 Sheila Hampton knows how to take care of herself. After being banished from her close-knit woodland nymph clan for defying her father, she has made her way in the human world on her own.

Now she works as an exercise instructor for stressed-out paranormal brides. If she can tell a vampire that no exercise plan in the world will help her lose weight, she can handle anything. Until her father lifts her banishment and tries to force her to marry as part of a political power play, and an unlikely hero steps forward.

Charlie Tucker is used to being on his own. A sea nymph with no ties to his clan, he joined the Navy and became a SEAL. He’s been in war zones. Eaten bugs to survive. So posing as Sheila’s fiancé should be a simple protection detail. No problem.

Except there is a problem—several, actually. Their clans are mortal enemies. They have to pretend to be in love when they can’t stand each other. Plus, they have to plan the biggest fake nymph wedding of the century. And when Sheila’s life is threatened, these two loners must put aside their differences and rely on each other.

Can this paranormal Romeo and Juliet find a way to change their tragic ending to a happily ever after?

After I read the previous book, I couldn't wait to read about Sheila and Charlie. Two nymph from different clans. Wood nymphs vs sea nymphs.

When Sheila's banishment gets lifted, wood nymphs want her hand in marriage for a better political position. When Charlie hears about this, he steps in to be her temporary fiance.

The couple is absolutely adorable, and I love everything about this series- especially the fun book titles. I can't wait to read the next book!