A Love Letter to Whiskey by Kandi Steiner 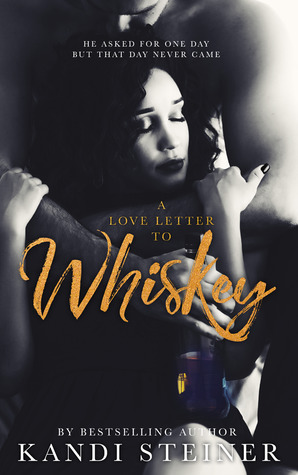 [BLURB]
It’s crazy how fast the buzz comes back after you’ve been sober for so long.

Whiskey stood there, on my doorstep, just like he had one year before. Except this time, there was no rain, no anger, no wedding invitation — it was just us.

It was just him — the old friend, the easy smile, the twisted solace wrapped in a glittering bottle.

It was just me — the alcoholic, pretending like I didn’t want to taste him, realizing too quickly that months of being clean didn’t make me crave him any less.

But we can’t start here.

No, to tell this story right, we need to go back.

Back to the beginning.

Back to the very first drop.

This is my love letter to Whiskey. I only hope he reads it.

This story shattered my heart into a million little pieces. There were moments when the broken parts were coming back together, but then it would just go back to breaking again and again.

The romance between Jamie and B is full of angst.

It's them against time.

Their relationship has so many ups and downs.

The story follows them throughout high school, college, and adulthood. So many opportunities and so many mistakes are on their path.


This story just felt so real, and I couldn't put it down. My emotions are still trying to find some balance. I loved this story, and I hope to read more by Kandi Steiner.