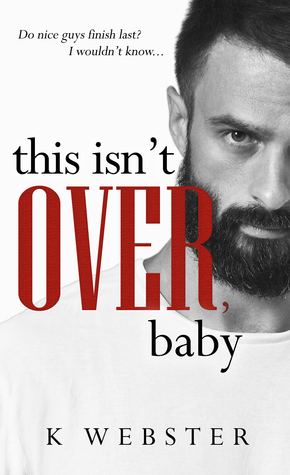 [BLURB]
They’d won the battle and I held up the white flag of defeat…
But the war wasn’t OVER.

I suffered the aching loss of what they had stolen from me.
OVER and OVER again, my heart broke.
The white Queen and the black King had taken OVER the game
and ruled for what seemed like eternity.

Until one day, eternity was finally OVER.

I was the dark knight who would rise again and conquer.
I was the man who would win OVER the most important piece on the board.

A slayer. A protector. A father.
A new king with the blackest of hearts.

And head OVER heels in love with…
The little princess who owned my twisted soul.

Sometimes the villains don’t just want their happy ending…
They demand it.

This isn’t OVER, baby.
This will never be OVER.


Warning: This Isn’t Over, Baby is a dark romance. Strong sexual themes and violence which could trigger emotional distress are found in this story. This story is NOT for everyone.

I'm not sure what to say about this. I really like Gabe. He is an evil person that you just want to cheer for. His sexual hunger

Now Hannah.... she's something I wasn't expecting. She looks just like her mother, but her mind is warped. She's twisted. She's sick. I also wanted her to kill her a couple of times. I just don't know what to think.

The story wasn't my favorite out of the series, but I really enjoyed seeing Baylee and War again. I can't wait for the next book. There is a new generation of crazies coming!