Sachael Desires (The Mine #2) by Melody Winter 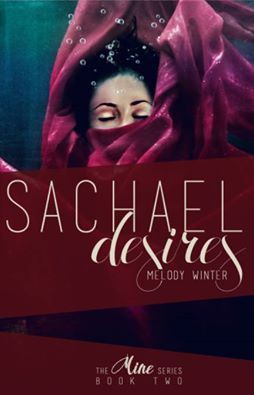 [BLURB]
During her ordeal with the Sect, Estelle Bailey dreamt of escaping back into the arms of the sea—and Azariah. But freedom came at a price, and though she’s back with the Sachael who’s stolen her heart, she’s also land-bound until the next full moon. And with the threat of Orontes looming ever larger behind them, Azariah, Estelle, and Michael—her once-captor turned rescuer and friend—are on the run.

Following Michael's lead, they seek sanctuary amidst the natural beauty of the Orkney and Shetland Islands until Estelle can complete her next submergence ritual and Azariah can whisk her away to the safety of Saicean.
​ ​
Secrets, betrayals, and old enemies await them, though, and as events spiral out of control, Azariah makes a decision that puts all their lives at risk, forcing Estelle to face a journey she never wanted to take. With time running out and tempers running high, her only hope to save the man she loves lies in a reconciliation between two kingdoms who despise each other.

Book Two in the Mine Series, Sachael Desires further expands on the intricate underwater world of the Sachaels, and the hostility and isolation of not belonging.​

The story continues right where Sachael Dreams left off. Estelle, Michael, and Azariah are running and hiding from Orontes. They need to get to Saicean and find safety with the other sachaels, but Estelle needs to complete a submergence in order to be able to swim there.

Estelle's personality is a bit different from the previous book. In the first book, she was really forgiving and kind. In Sachael Desires, she is more open to death and violence.

The dialogue between the characters is a bit odd, but I got use to it. This series also feels like it's for young adults, but there are steamy scenes included intended for an older audience.

The story is creative, and I just love the fantasy that Melody Winter creates. I can't wait to see what will happen next in this series.