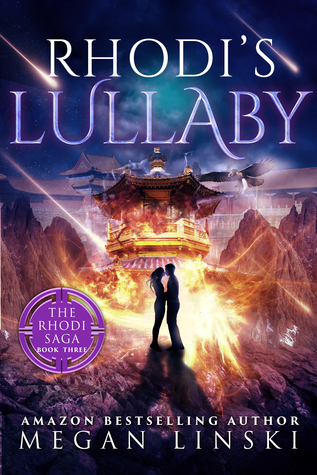 [BLURB]
Cities burn.
Governments fall.
Lives are lost in a desperate war...one the Rhodi are losing.

The world has been devastated by the tyranny of the Red Huntress. To save Crescentia, Dylan and Devin attempt to decipher the mystery of the ancient letter their ancestors left behind, the only hope of salvation for their kind. Dylan continues to fight foes both on the battlefield and within her own mind, all while wrestling with the confused feelings she has for Enfys, the alluring spy who has become devoted to her cause.

In the epic conclusion to the thrilling Rhodi Saga, one brave warrior will stand in the way of corruption, to take place before her destiny…or her death.

Rhodi’s Lullaby is the third installment in the suspenseful young adult dystopian series fans and critics are calling an original masterpiece in the epic fantasy genre.

Rhodi’s Light and Rhodi Rising are also available. Catch up on the entire series today!

Rhodi's Lullaby is the best book in the series. Things get serious. Secrets are revealed, and the group experience more loss and pain.

The story is mainly focused on Dylan, but it still touches each character. Everyone is preparing for the war against Rachel and the Hunter's Guild. The story had some moments that were a bit predictable, but I loved the adventure and action. I also enjoyed the sweet moments of romance and love. Enfys is a little Romeo that I couldn't get enough of.

The Rhodi Saga is a great YA series. Not just because of the fantasy and action, but because it also talks about mental challenges and internal struggles.

My only issue with this was that I couldn't fully grasp the setting. My mind wouldn't shutoff. There are cars, electricity, nightclubs, cocktails... Everything we see in modern society. But why is everyone fighting with spears and knives? Where are the guns? Are there planes? The group also meet some Asians with strong Japanese qualities, but they are wearing qipaos. Yea... I'm overthinking it.

Anyways, I got over it and put it behind me. I really enjoyed the series, and I'm interested in reading more books by Megan Linski. She's got a great imagination worth sharing.