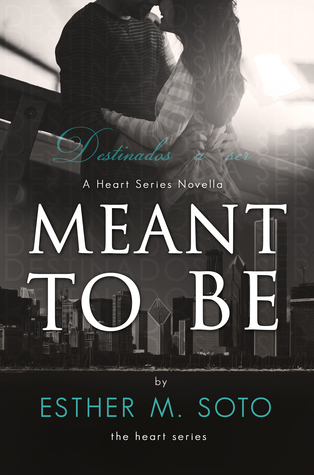 Can one simple decision alter the rest of your life?

When Christina Reyes agrees to attend a local bar on Valentine's Day, she doesn’t expect to bump into her old college roommate, Ileana Harper. Funny how things happen. One minute you're stopping to greet an old friend, and the next you're literally running into the most perfect male specimen you've ever laid eyes on.

Special agent Brad Nelson’s life is full of engagements, appointments, and obligations—and that’s just during his personal time. Getting a drink with his fellow agents on some made-up holiday isn’t on his agenda. Neither is the gorgeous little brunette that plowed into him. Yet every fiber of his being wants to make room for her.

Some believe events are just coincidence.
Some believe we can control our future by the choices we make.
But, what if they're wrong? What if there is such thing as fate?

What if some things are just Meant to Be?

Meant To Be is a companion novel in the Heart Series. The story takes place before book 1, and it's about the relationship between Christina and Brad.

Christina was Ileana's roommate in college. Because Ileana liked to be isolated and alone, Christina wasn't able to contact her after graduation. Years later, the ladies run into each other at a bar, and Christina makes sure that her friend won't leave her life again.

Brad Nelson is an FBI agent. He strongly encourages Ileana to introduce him to her lovely friend. Brad instantly falls in love with Christina's positive energy and spunk. Even though he briefly meets her, he knows she is the one. Under his tough exterior, he's such a sweet perfect man. He'd do anything for her. Unfortunately, there are things in Brad's past that might ruin everything.

I love their relationship. I also love how Ileana and Tommy are involved in the story. The characters don't travel across time, but there are some hints and teasers about what's to come in the future.