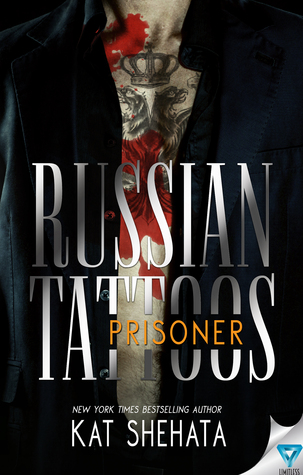 Carter is the obsession of mob boss Vladimir Ivanov, a man she once loved. Now a mafia war has erupted on his home turf, and Vladimir’s enemies have put a bounty on her head to force him to surrender. If she is captured, his rivals will deliver a deadly ultimatum—his life in exchange for hers. The price for Carter’s freedom is Vladimir’s blood.

Vladimir holds ultimate power as godfather of the Ivanov Bratva…

He spent five years in a Siberian prison camp and has earned every tattoo inked into his skin. He is a powerful man who rules his crew with an iron fist.

But his enemies have discovered his only weakness—Carter. Vladimir knows if she stays in his world, he is handing her a death sentence, so he vows to get her home and never interfere in her life again. Giving up the woman he loves is the only way to protect her from the bad guys—including himself.

Some punishments are worse than death, and the head of the Ovechkin Bratva will go to any length to seek vengeance and inflict maximum suffering on Vladimir.

Carter may be Vladimir’s weakness, but she is also his only hope for survival. When the boss of the Ovechkin family threatens the man she loves, she must fight for Vladimir’s freedom before their rivals can deliver the fatal blow.

Love is blind—but it could also be deadly.

This was so good. I think this was better than the first book. There's more action, romance, and suspense. I finished this is one day... again.

Even though Vladimir and Boris left for Russia, they aren't finished with Carter. Someone wants to hurt Vladimir, and they plan on hurting the one thing he loves.

To keep Carter safe, Boris kidnaps her and takes her to Russia. Held as a prisoner, Carter finds ways to cope with her situation. She's stuck with her strong and silent bodyguard, but he becomes a good friend in her confinement.

Vladimir doesn't want to get more involved in Carter's life. He just wants her to be safe. Because of his shameful actions in the previous book, he is a different man. Total transformation. We meet his family and see his interactions with the children. My heart melted in various parts of the story. But sometimes I just wanted to poke him to get him agitated.

What? His anger is sometimes a turn on.

Everything about this story was perfect. As soon as I finished this book, I looked to see when the 3rd book would be released. I couldn't find any information.... So I guess I'll just go cry in a corner.