Back to Yesterday by Pamela Sparkman 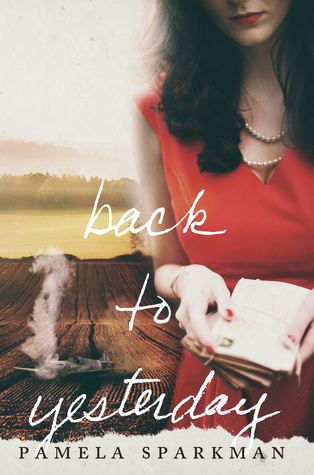 I wrote the letter I needed to write and prayed it wasn't too late.

You were right. I was wrong. I've never been more wrong in my life.
There - I said it.
I’ll say it a million times if you just come back to me.
Come back to me. Please!

I was so wrong. I do love you.

"You took my hand and showed me the way to love. You were my compass when I had no direction and no idea which way to go. You led. And I followed."

On the outside, Sophie looks like she's carefree and happy. But if you really look closely, you can see all her cracks and insecurities. The wall around her heart is there to protect her from lies and broken promises. But when an injured pilot from the US Army Air Corp enters her life, everything changes.

Time stops for Charlie when he sees Sophie working at a cafe. He's honest, patient and kind. As the story switches from the past to present, you'll fall in love with him. The things he do to make her trust him is heartwarming and even breathtaking at times.

Back to Yesterday is a story that will make your heart and soul cry. It's a beautiful story about true love. I strongly recommend this book for anyone looking for some good tears. Pamela Sparkman did a brilliant job!

But I do know how many times I wished I could have said it back.

Or maybe I couldn’t. It was an infinite number.

When I awoke, Charlie was asleep on the floor beside the couch with a blanket and pillow I could only assume he had gotten from my mother. I watched his chest rise and fall and I matched his breathing patterns, breath for breath. Inhaling and exhaling, keeping time with his.

An invisible force, an unexplainable connection, tethered my heart to his, and I hated it and loved it.

“He refused to leave,” someone whispered.

I sat up and spun around to find the voice. My dad sat in one of the armchairs across the room. “He refused to leave,” he whispered again. The streetlights that filtered in through the window illuminated his face enough so that I could see the tilt of his head and the compassion in his eyes. I opened my mouth to respond, but he echoed the same words again, only this time he added, “Hear what I’m saying, baby girl. He…refused…to…leave.”

This time, the words knocked the breath out of my lungs. “Dad,” I choked.

“He refused to leave,” he repeated. Each time he said it, it was quiet, unassuming, yet relentless.

A fat tear rolled down my cheek.

“You have to stop,” I pleaded.

Dad went quiet and I silently thanked him for the reprieve. I laid my head back down and folded my arm over my eyes.

“Go back to sleep, baby girl. I’ll see you in the morning.”

I listened until his footsteps had carried him upstairs and I let out a shaky breath. Years of hurt had managed to catch up to me that night and I didn’t know why. I had been numb to it, putting all of my emotions into a box and keeping the lid closed, and now that lid had been opened, I desperately wanted to slam it shut, lock it away in a closet, and throw away the key.

I lay there for a while trying to unravel how I had become so unsteady, however, my swollen and puffy eyes grew heavy and sleep was fast approaching.

I was just dozing off again when I heard a whisper in the dark say, “I refused to leave.”