In Sickness and In Elf (Paranormal Wedding Planners #1) by A.E. Jones 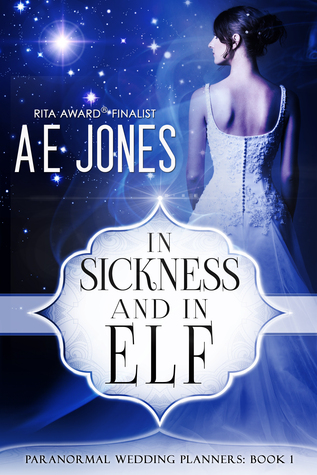 [BLURB]
Meet Alex Bennett—wedding phobic in a family of wedding planners. Not the best combination, but being left at the altar can wreak havoc on one’s self-esteem. When Alex’s grandmother requests her help with a high-profile wedding, Alex sets aside her fears to attend. But when the bride runs away, and her grandmother’s business faces ruin, Alex will do whatever it takes to uncover the truth. Even when the truth leads to sabotaged weddings and a runaway bride who isn’t human. The last thing Alex needs to deal with is the overbearingly handsome man brought in to lead the investigation.

But with humans and supernaturals bent on destroying each other, Alex and Devin must put aside their differences and work together. Can Devin protect Alex and defeat the enemy without his powers? And now that Alex knows supernaturals do exist, can she once again believe in a fairy-tale happily ever after?

[MY THOUGHTS]
Alex Bennett was left at the alter. That experience made her developed a phobia for weddings. It was so bad, she had to take a break from her grandmother's wedding planning business.

With the help from her therapist, she eventually was able to come back to work. Unfortunately, there were larger things she had to worry about. Someone was sabotaging the weddings. Well... the supernatural weddings.

It was a crash course for Alex. Frog demons, bird demons, vampires... the list went on.

While her head was spinning, Devin and his team were hired to help solve the mystery. Too bad he's a supernatural without any powers. The magistrates took them away until his trial.

I couldn't get enough of Alex and Devin. Even though Alex was sometimes a bit obtuse, her personality was cute and endearing.

"How can one beautiful, stubborn woman wreak so much havoc without even realizing it?"

In Sickness and in Elf was so fun, I couldn't put it down. The next book will be about Alex's best friend, Sheila. I can't wait to get my hands on it!