To Win Her Love (Players #1) by Mackenzie Crowne 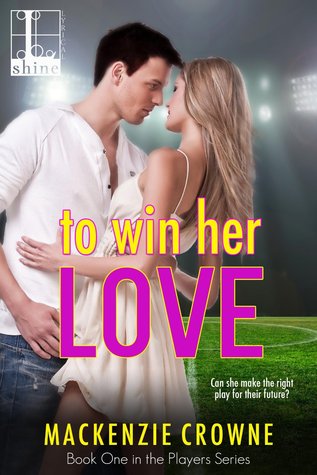 [BLURB]
To win the game, they’ll have to risk losing their hearts…

When a bizarre child custody stipulation pits popular sports blogger Gracie Gable against football superstar Jake Malone, losing the battle for her twin nieces isn't the only thing Gracie has to worry about. Forced to live for three months under the same roof as the sexy tight end, will she fall prey to his flirtatious pursuit? Or worse, will the skeletons in her closet destroy her chance for the love and family she so desperately wants?

Neglected by his parents as a boy, Jake doesn’t believe in happily ever after. Yet living with Gracie and the twins might be enough to change his mind—and his womanizing ways. But when the press unearths a scandal from Gracie’s past, will he lose the one woman he was ready to open his heart to?

[MY THOUGHTS]
This was so good! I need to do the happy dance.

Stuck on a farm for 3 months, Gracie and Jake are in a competition to win custody over 6 year old twins. Gracie always had a crush on the famous football player, but she tries to keep her distance to avoid heartbreak. She also has a painful secret about her past, which causes her to have trust issues with anyone.

Jake has a reputation of being a playboy and never thought he needed to settle down. But then he becomes head over heals for Gracie. Although they are both worried about the custody battle, they both put the kids first. They were just perfect for each other.

The banter between the two was laugh out loud funny. I can't wait to read more books from Crowne.