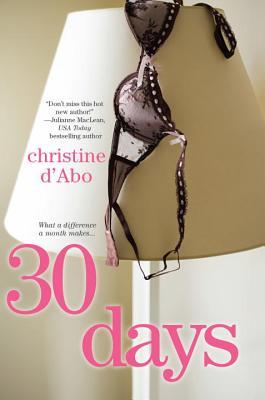 [BLURB]
For years, Alyssa has been going to bed with a memory. Is she ready to wake up with a fantasy?

Some people wait their whole lives to find their soul mate, but not Alyssa Barrow. She met Rob at nineteen, and they were set to live happily ever after—until he became ill. In his final days, Rob urged his beautiful, young wife not to abandon happiness—or pleasure. He even left her a special gift, a sexy game plan to help her move on: Thirty cards with instructions for thirty days of passion. You’ll know when the time is right, he’d said. Now it’s two years later, and when Alyssa meets her hot new neighbor, Harrison Kemp, she begins to think the right time is right now…

From his sculpted thighs to his devilish grin, Harrison is the kind of man women want. Before she can lose her nerve, Alyssa tells Harrison about her long-ignored cards…and asks him to help her fulfill them. It’s a favor he’s more than happy to, um, perform. With his skillful touch, and the hot press of his lips against her skin, Alyssa finds herself re-awakening to life—and a host of other sensations. But what began as not-so-innocent fun soon grows into true intimacy, and Alyssa realizes she’s opening herself up not just to sex…but to love. When it comes to a future with Harrison, what’s really in the cards?

Saucy, heartwarming, and insightful, 30 Days explores the agony—and the ecstasy—of starting over, and how a little encouragement, and a little courage, can go a long way…

I thought 30 Days was going to be like PS I Love You, but this was so much better! It's funny, super sexy, and seriously HOT. There were even some parts where I needed a tissue for my tears (I'll admit it).

When Alyssa's husband lost his battle against cancer, Alyssa thought she was never going to find love again. Her husband left her a loving letter urging her to move on. The letter involved a 30 day task to help her explore her sexual desires.

Two years later, Alyssa is ready to experiment with Harrison, her new neighbor. Harrison agrees to help Alyssa with the sexual tasks, but he lets her know that he is not looking for a relationship. Alyssa thinks being friends with benefits would be a good thing... until she gets attached. Will Alyssa get another chance at love?????