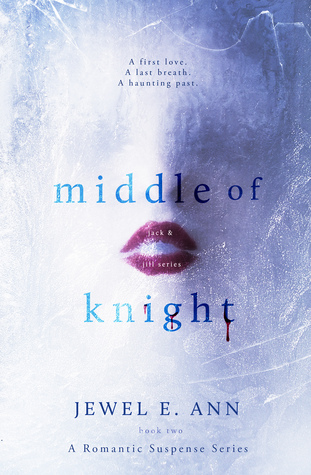 A first love.
A last breath.
A haunting past.

Armed with a sinful past and an equally sinful body, Jackson Knight absolves his vow of celibacy to pursue Sergeant Monaghan’s unsuspecting—older—housekeeper.

Ryn Middleton, on the cusp of turning forty with a snarky daughter, a killer dog, and an abusive ex-husband, finds Jackson’s advances humorous and unbelievable. After intense negotiations including Vera Wang, Ed Sheeran, and sex four times a day, Ryn accepts Jackson’s marriage proposal on their first date.

What could possibly go wrong?

While struggling to lay claim to the woman of the dreams he never had, Jackson is forced to deal with a grief-stricken Jillian trying to hold on to her past without letting go of her future—the doctor who took her heart and the Sergeant who gave her a new one.

Beyond the hope for light, lies the middle of darkness, the illusion of truth, and a haunting past.

“Luke had the best of her and she didn’t want it back—not ever. But AJ filled her lungs with life after death, he gave her so much hope that there was in fact light beyond the darkness.”

Jewel E Ann did it again. She gave me another big hang over. I can't get enough of her books because her skills are off the charts. Thank you for another amazing story.

I loved Jackson and Ryn, but my favorite parts were still about Jessica/Jillian, AJ, and Luke. AJ... Luke... I love them both. They're polar opposites, but their love for her was unshakable. There were moments I almost cried because my heart was seriously hurting. I need the next book now... This is my favorite series this year, and one that I'll reread over and over again.