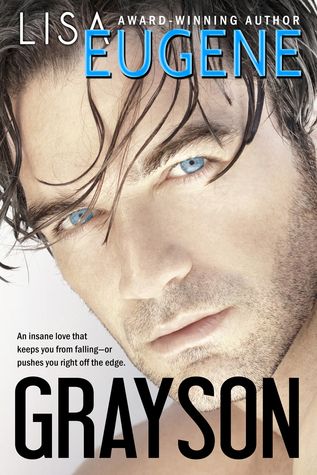 [BLURB]
An insane love that will keep you from falling---or push you right off the edge.

All she needed was a job…
The last thing twenty-four year old grad student Angie Roberts needs is to worry about her new boss’s father. After all, she’s never even seen him. He remains sequestered upstairs in a house that looks like it should be the main feature in an episode of Hoarders. She had no idea the house was such a dump when she took the job. But she’s concerned about the safety and health of the old man living under such horrid conditions.

What she got was a mystery…
Despite warnings not to venture upstairs, she wanders up to the second floor. What she sees is shocking. The man she finds is a gorgeous, sexy, middle-aged man-- and he's stepping out of the shower. But something is definitely not right. Why would this wealthy, handsome man live in a house in such disrepair while his nine-teen year old son resides in a lavish penthouse? Why does he hide away from society? Why does he come to her rescue and then run away?

What she discovered was heartbreaking…
Angie learns that forty-four year old Grayson Whitmore suffers from schizophrenia. Paranoid, he retreats into his own world.

What she ended up with was a treasure…
Angie is determined to get through to Grayson. They form a friendship that blazes into an inconceivable love fired with raging passion. Angie must now come to Grayson’s rescue because the wicked that has been perpetrated on him is unconscionable. First, though, she must gain the trust of a man whose mind does not allow for such a thing.

Wow.... I literally couldn't stop reading Grayson. And for any book that keeps me up at night, I have to give it 5 stars. This deserves a standing ovation.

Grayson has mild schizophrenia, and he lives in a big house that could be on an episode of Hoarders. He doesn't trust anyone that visits his home. But there's something about Angie that makes him curious.

Angie is a student working on her masters. She needed to get a second job to pay for school and rent, so she got a job to clean the downstairs of the house. As a registered nurse, she understands mental illnesses. But it isn't her knowledge of the illness that intrigued Grayson. It is her giant heart.

The way that Angie pulls Grayson out of his shell is so precious. She doesn't push him or force him to get better. Grayson's trust in her leads him out of darkness. This beautifully written story will melt your heart. I can't believe I waited so long to read this.