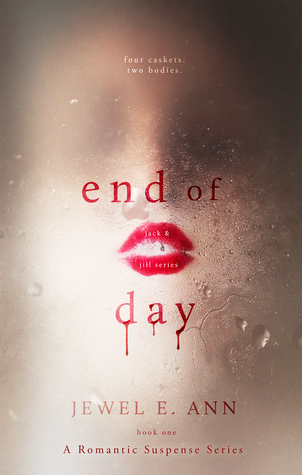 [BLURB]
Four caskets. Two bodies.
Jessica and Jude Day witness their funeral and that of their parents a few yards away from mourning family and friends. Stripped of the only life they’ve ever known, the Days say goodbye to San Francisco forever.
Six months later, two thirty-year-old misfits with elite self-defense skills and penchants for alcohol, sex, and trouble arrive like an earthquake to Peaceful Woods, a retirement community in Omaha, Nebraska, that thrives on rules and gossip. Welcome home, Jackson and Jillian Knight.
Jackson celebrates his new beginning by embracing his job and wiping his cavalier past clean with a temporary oath of celibacy. But Jillian’s past is branded into her soul—the deaths, the insanity, Dr. Luke Jones, and the need to make her lovers bleed. Her chance for redemption comes in the form of a next door neighbor, one Senior Master Sergeant Monaghan. He’s sexy, dangerously alluring, and riddled with emotional issues from years of service. He’s also … So. Damn. Grumpy.
Their mission is simple: Let go, start over, don't kill anyone, and pray that nobody wakes the dead.

Earth to earth, ashes to ashes, dust to dust; in the sure and certain hope of the Resurrection to eternal life.

End of Day is a funny, sexy, and emotional journey. It's just brilliant and a must read! There are so many layers in the story that it's difficult to stop yourself from reading.

Jessica's biggest loss was Luke. He was her savior. Her breath of fresh air. He loved her even though she was damaged.

"You took everything. I never had a choice. You tore into my life... into my heart, wrecking all sense of the man I was before you. Being with you is the best part of my day... every day. You think you're broken, but you're not. And if you were... it wouldn't matter. I love every. Single. Peace of you.” - LUKE

Jessica and Jude Day are now Jillian and Jackson Knight. (I thought this was very clever and cute.) Jillian can't have Luke. Jillian doesn't know Luke. Jillian has a chance to be a normal woman... in Omaha, Nebraska. Bye bye San Francisco.

Sergeant Monaghan (AKA AJ) is their lucky grumpy neighbor. He is divorced, suffering from PTSD, and also looks like Hugh Jackman. Yummmm!.

AJ and Jillian's relationship is a bit messed up... but it works. They are each other's therapy. The chemistry between them is explosive.

"Her skirt fell over his head like a mechanic under the hood of a car. God, did she need to be serviced.”

But of course things are complicated. One reason is because Jessica/Jillian can't forget about Luke.

The story makes you really feel for the characters. It ends in a cliffhanger... but the beginning parts of Middle of Knight are included in the back. But that also ends in another cliffhanger. Haha. THANKS A LOT JEWEL E ANN~ just kidding. Thank you for giving us another amazing story! You were born to do this!